Chemical dispersions have been used in the rubber industry for many years. Polymer bound dispersions (PBD) are the oldest and still most widely used chemical dispersions. They can be made with a variety of different polymers, but EPR is the most common because it is not cross linked with sulfur or sulfur containing accelerators, allowing for longer shelf life. EPR polymers can also accept higher filler concentrations, allowing for increased activity levels. PBD’s are ideal for powder raw materials that can cause health hazards and housekeeping issues such as lead or ETU. Drawbacks to PBD’s include cost, lower activity levels, increases in raw material melt point, and added heat history that can cause scorch issues in ultra fast accelerators like ZDMC or BDMC.

Liquid bound dispersions (LBD) are the newest innovation in dispersion technology. The name liquid bound dispersions can be misleading because the end product is still a bead or powder. The name is derived from the oil and other additives that are used to reduce the melt point of the powder chemical, increasing its dispersability. Liquid binder systems tend to be cheaper than polymer binder systems because the primary ingredients (oils and waxes) tend to be cheaper than polymers. LBD’s also allow for higher activity levels which reduce the cost of the binder system.

The most common types of chemical bound dispersions are rubber curatives and accelerators, because sulfur and most accelerators are insoluble in rubber at cure addition mixing temperatures (82°C to 110°C). Therefore, to achieve proper accelerator dispersion, the individual particle must be encapsulated by the rubber. “Poor dispersion of accelerators can be seen as undispersed streaks or particles of powder. It can also be seen as small convex flaws on the surface of the part, referred to as pebbling. Poor dispersion of accelerators can cause inconsistency in the crosslink density throughout the cured part, leading to the initiation of a failure event; such as inconsistent modulus, tensile rupture, inconsistent tear, or fatigue failure.” 1 So to achieve excellent accelerator dispersion, you have to try to reach the accelerator’s melt point either in your mixing or curing process. 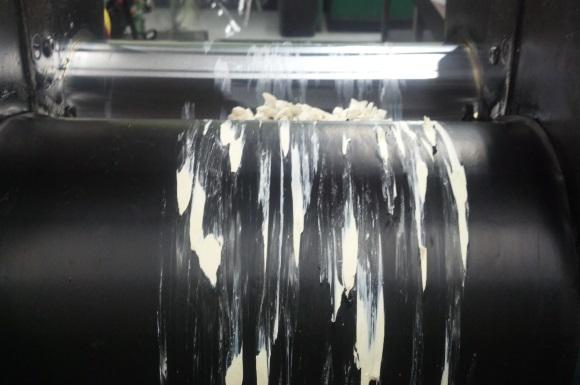 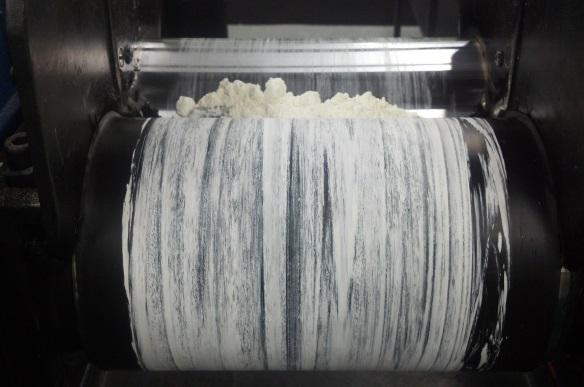 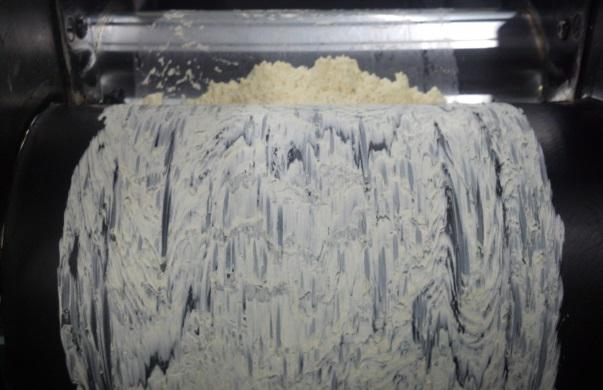 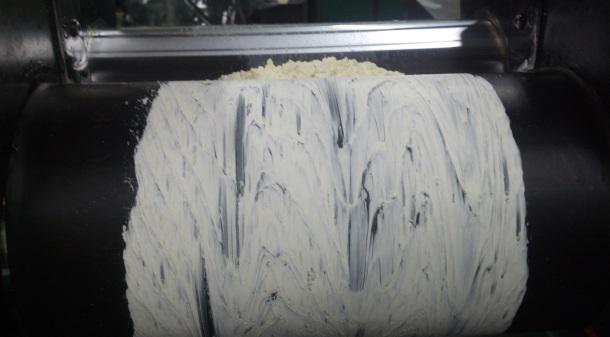 At 0 seconds, the MBTS 75 PBD is dispersing the best. All of the other MBTS samples still have quite a bit of loose material at the nip. 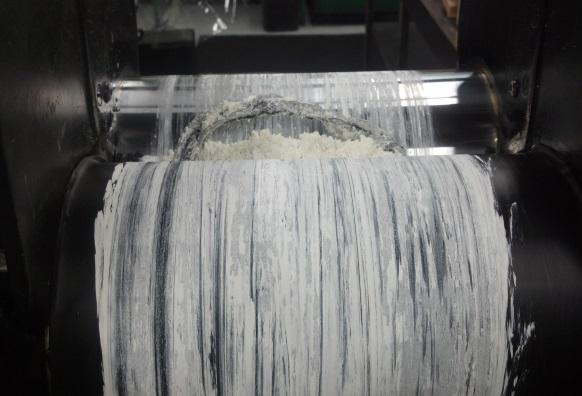 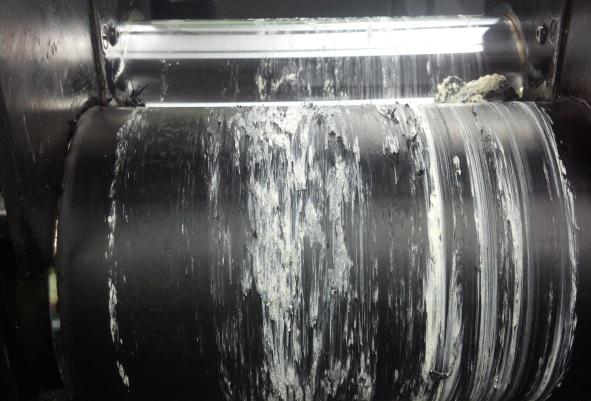 At 30 seconds, the MBTS PBD is still dispersing the best, the 75 and 90 LBD’s look similar to each other and are dispersing better than the MBTS powder. The MBTS powder still has a lot of loose powder in the nip of the mill. 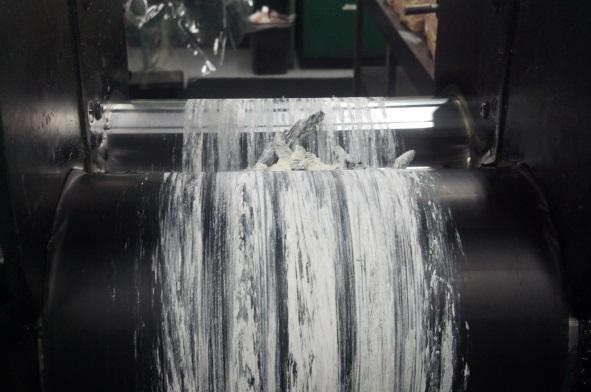 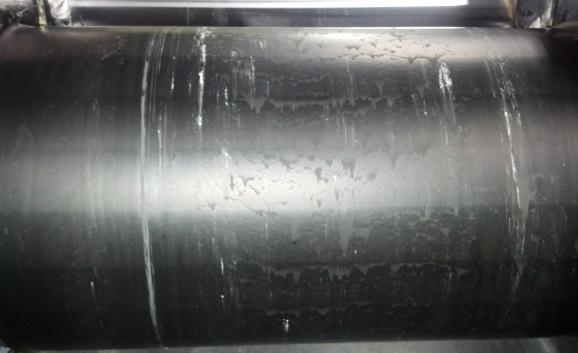 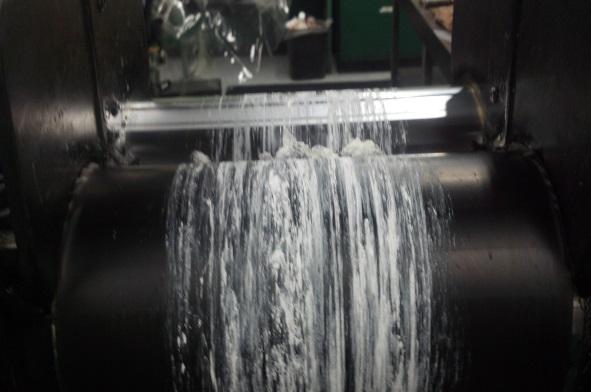 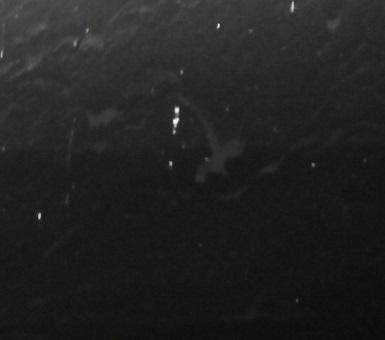 At 75 seconds, both the MBTS 75% and 90% LBD’s are completely dispersed. The MBTS 75 PBD still has undispersed particles and the MBTS powder still has a lot of undispersed material in the nip of the mill. 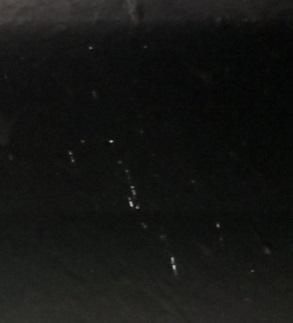 At 90 seconds, the MBTS powder no longer has any loose powder in the nip and the MBTS 75 PBD still has undispersed particles. 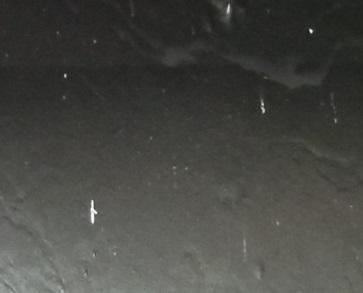 At 120 seconds, the MBTS powder still has small amounts of streaking and the MBTS 75 PBD still has undispersed particles and has not improved at all in the last 60 seconds. 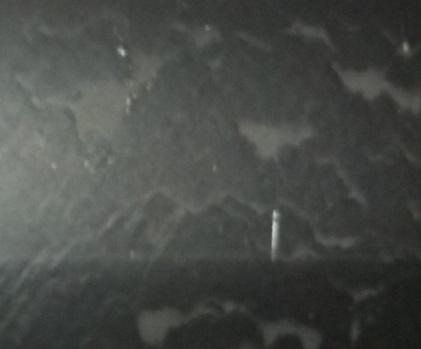 At 135 seconds, the MBTS powder is completely dispersed and the MBTS 75 PBD still has undispersed particles.

The polymer in the MBTS 75 PBD initially wants to disperse faster because the EPR in the binder system is a good processing polymer; however, since the polymer is stable to 300°C it is not going to melt in any rubber process. Also consider where most curatives and accelerators are added within the mixing cycle – after the fillers, oils, antioxidants, and process aids, which reduces the shear of the compound. Traditionally polymers would not be added after all of these other raw materials, but that is essentially what is happening when using a PBD, which makes it very hard to disperse the polymer in the binder system.
Not only do the MBTS LBD’s disperse faster but they are also cheaper than traditional MBTS PBD’s. Polymer tends to be more expensive than the additives used to make liquid bound dispersions. When PBD’s were introduced many types of EPR / EPDM polymers were very cost competitive; unfortunately, with increased volatility in the oil markets over the last 20 years, many companies have shied away from using PBD’s because the cost can fluctuate dramatically. If you look at just the cost associated with binding the MBTS, there is a substantial difference in cost (See Graph 3).

There is a 39% increase in the cost of MBTS to buy it in a PBD form, while there is only a 15% increase to buy MBTS in 75% LBD and only an11% increase to buy MBTS in a 90% LBD. Not only are the raw materials used to make LBD’s cheaper, but since they can be made at higher activity levels, there is less binder which also reduces cost.
Multi Chemical Liquid Bound Dispersions
Multi chemical liquid bound dispersions are also called chemical blends. Chemical blends can be comprised of any non-bulk raw material that is not injected directly into the mixer, such as zinc oxide, fatty acids, antioxidants, curatives, accelerators, resins, metal oxides, and process aids. Chemical blends improve batch to batch consistency, reduce variation in cycle times, and reduce fly loss. Pre-weigh chemical blends in low melt bags offer “peace of mind” by reducing scrap and down time by eliminating human error.
Chemical blends also reduce the number of in house raw materials, which has a positive impact on plant cleanliness, warehouse space needed to store raw materials, and vendor headaches. Even though there is added cost in chemical blends if the chemical blender is buying certain raw materials in truckload quantities that most mixing operations would not buy in such large quantities, these off sets can help minimize the cost.

Pyramid weigh outs offer many of the same advantages as chemical blends; however, chemical blends exclusively offer increased raw material consistency and reduced melt points. Chemical blends can offer this because the raw materials are blended at high speeds in a high shear mixer with binder systems designed to reduce the overall blend melt point. Pyramid weigh outs use an automated weighing system that eliminates human error and weigh multiple ingredients to specified weights into low melt bags. Hence the name “pyramid” weighing because raw materials are being added in layers to the bag and not being adjusted in any other way. Pyramid weighing does not improve upon the product; it only improves upon the process by eliminating any human error; whereas chemical blending improves the product and the process (see Figure 1).

Chemical Blend vs. Pyramid Weigh Out

See FIGURE 1. By looking at the visual differences between a pyramid weigh out and a chemical blend you can see the differences that high speed mixing and a binder system can have on the raw materials, making them more uniform, which reduces hot spots and poor dispersion in the mix.

How Chemical Blends Improve the Product

When you add multiple curatives and accelerators in your mixing process, you are essentially adding materials with different melt points that once inside the mixer can create pockets of materials that will melt and disperse at different times, which can lead to hot spots and poor accelerator dispersion. By blending the curatives and accelerators together with a liquid binder, a more uniform product is added to the mixer with a uniform melt point, eliminating these pockets of hot spots and poor dispersion. (See Graph 4)

Looking at the cure system in Graph 4 you can see that both the sulfur and the Retarder Esen would not hit their respective melt points in the mixing process, which means it has to happen during the curing process and if it does not, this could lead to a failure event. However, the chemical blend of the curatives in Graph 4 with the binder system will reach melt point in the mixing process, ensuring good accelerator dispersion.

The cycle times for each batch were reviewed for mix consistency. The chemical blend batches were much more consistent and had an 8% improvement in cycle time. (See Graph 5) 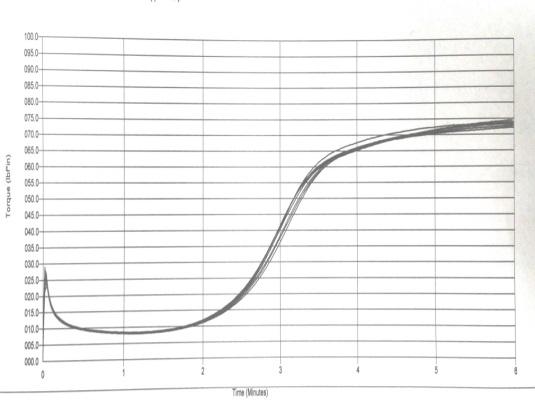 LBD’s are superior to PBD’s because they reduce the melt point of the accelerator, increasing the likelihood of proper accelerator dispersion. Proper accelerator dispersion is essential for homogeneous crosslink density and or modulus of a cured rubber part. LBD’s also disperse faster, cost less, and improve productivity over both powder and PBD’s. Multi ingredient LBD’s are called chemical blends and they are superior to pyramid weigh outs because, like their single raw material counter part, they also reduce melt point and improve uniformity. This improves batch to batch uniformity and reduces cycle times. Chemical blends also have a positive impact on tensile and % elongation. In this study, the cost of the chemical blends were lower then the cost of pyramid weigh outs when taking into account the savings in cycle time.

Polymerics custom rubber mixing services both black and color in most polymer types.