Vulcanized Vegetable Oil (VVO) is used in rubber compounds to improve ozone resistance, increase dimensional uniformity, reduce hardness, and improve extrusion and calendaring. VVO is an effective means to boost ozone resistance in NR applications that require non-staining and low bloom capabilities. VVO is also an effective plasticizing agent in compounds that require high tensile and modulus strength which limits the amount of process oil which can be used.

VVO is made by blending vegetable oil, sulfur, and other raw materials above the required 160°C reaction temperature. Residual sulfur within the VVO itself can cause adverse effects on the long term aging properties of a rubber compound. This effect on aging properties limits the use of VVO in certain NR applications. Research on using a thiuram accelerator (TMTD) to bind the free sulfur in VVO to improve heat aging properties has been done in the past.1

Each accelerator was added in a VVO compound at 1.0 and 2.0 PHR to evaluate the accelerator and loading affects on heat aging properties. The below formulas were used to make the VVO compounds evaluated.

VVO is made by blending vegetable oil and other raw materials together above the 160°C reaction temperature. The degummed soybean oil was heated in a beaker to 165°C on a hot plate. Once the desired temperature was reached a powder blend of the sulfur, stearic acid, zinc oxide, and accelerator was added to the soybean oil and continuously stirred. The pre-blended powder additives were blended in plastic bags and worked mechanically to remove any clumps within the powders to ensure uniformity of the VVO before they were added to the soybean oil. The time needed for the reaction to take place depended on the type and loading of the accelerator used.

Once the VVO was synthesized it was removed from the beaker and put on an aluminum tray to cool. All VVO’s rested for at least 72 hours before being mixed in a rubber compound or tested. All accelerated VVO’s reacted faster than the control VVO without accelerators. VVO compounds with 1.0 PHR of DPG and 2.0 PHR DPG reacted at roughly the same time regardless of accelerator level. The VVO’s with TMTD, ZDMC, MBTS, TBBS had shorter reaction times with increased level of accelerator.

The VVO was tested for % free sulfur and % acetone extract to see what effects the accelerator additions made to the VVO. The % free sulfur is the un-reacted or lightly bound sulfur during the vulcanization process5. The % free sulfur was analyzed using ASTM procedure D-297. The extraction time was 16 hours and the method of detection was titration. The results were as follows:

The % free sulfur was lower in the VVO compounds with 1.0 PHR ZDMC, 2.0 PHR TMTD, 2.0 PHR ZDMC, and 2.0 PHR DPG then the control compound with no acceleration. Acetone extract is the amount of un-reacted oil and partially sulferized glyceride oil extractable from the VVO5. The % acetone extract was tested per ASTM procedure D-297 and the extraction time was 16 hours at the reflux temperature.

All accelerated VVO compounds had equivalent to lower acetone extract then the control compound with no acceleration. Acetone extracts of 35% or higher are considered standard grades of VVO5.

The VVO compounds were mixed into a NR compound to evaluate aging properties and ozone resistance. Three control compounds were mixed and are as follows:
Control-1 : No VVO
Control-2: Commercially available 2L Brown VVO
Control-3: Compounded VVO with no accelerators.
The VVO was evaluated at 20 PHR or 10% total weight of the mixed rubber compound. The mixed compounds were two pass mixed in a BR lab banbury and sheeted out and cooled on a two roll mill between passes. The formulas are as follows: 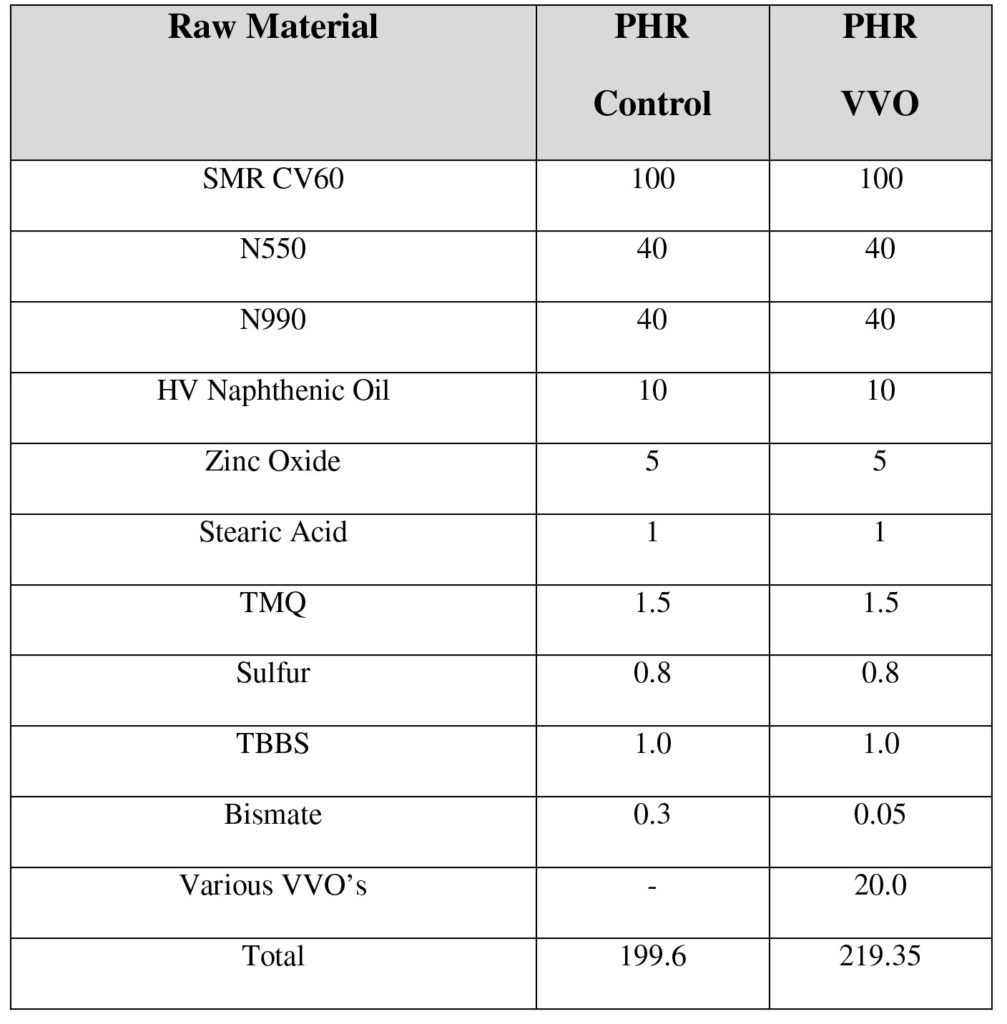 The scorch time was much shorter on the VVO synthesized in the lab and decreased when the loading level of accelerator was raised.
The cure properties were tested on a Moving Die Rheometer (MDR) per ASTM procedure D-5289 at 160°C. 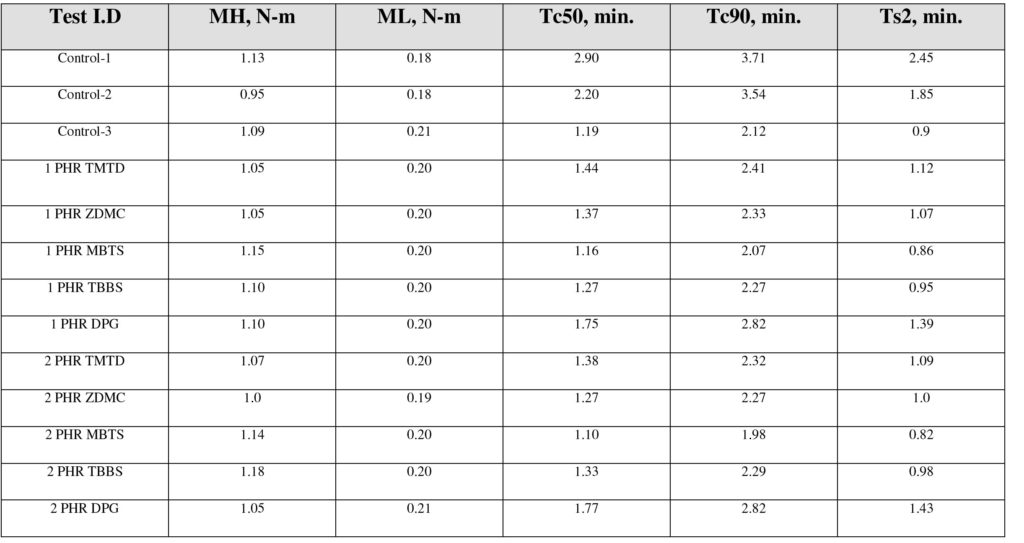 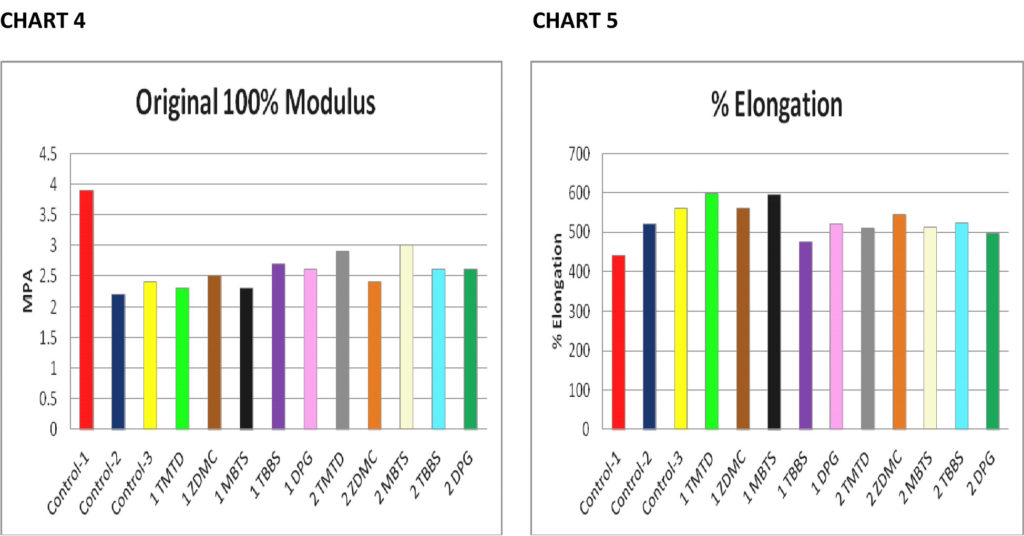 There is a noticeable drop in tensile from the control-1 compound with no VVO and the control-2 compound with commercially manufactured 2l Brown VVO. Overall tensile properties drop with VVOs with the higher loading of accelerators. The VVO synthesized with TBBS retained the same physical properties regardless of loading. All synthesized VVOs with lower loadings had higher tensile properties then all three control compounds.

Shore A Durometer was tested per ASTM D2240. There was not a significant difference in Durometer between any of the compounds. In fact what variation exists seems to be inherent to the test itself.
Aged Physical Properties were tested per ASTM procedure D-573 for 96 hours at 70°C. The change in physical properties is as follows: 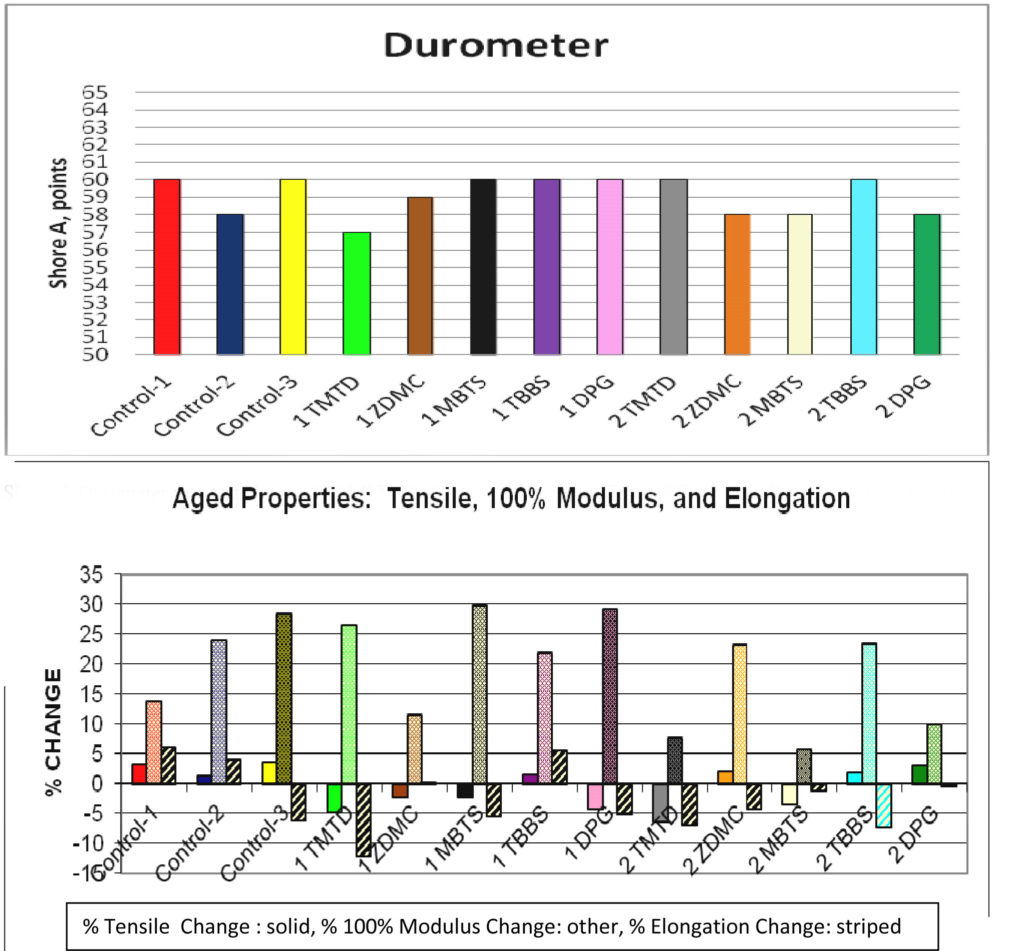 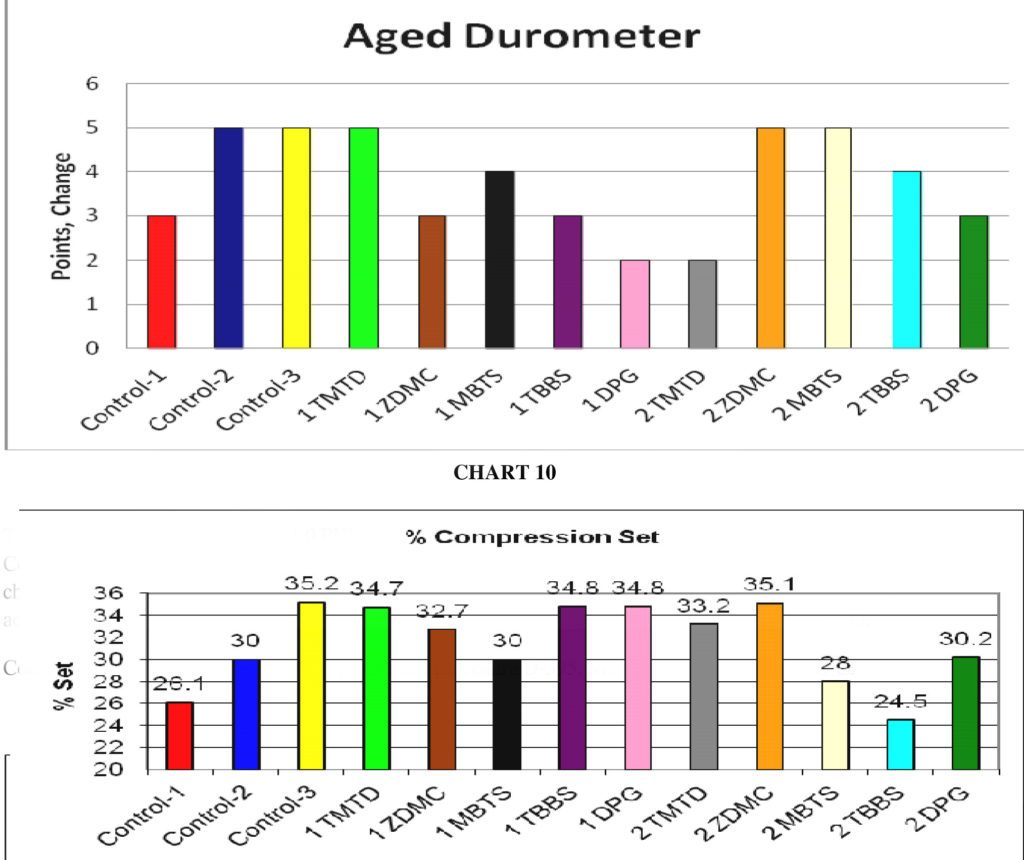 Compression set properties were tested per ASTM procedure D-395, Method B for 22 hours at 70°C.

The compound with 2.0 PHR TBBS has lower % set then the Control-1 compound. The compounds with 1.0 PHR MBTS and 2.0 MBTS have a compression set equivalent to the Control-2 (2L Brown VVO) compound.

The test compound was natural rubber (NR) which has unsaturation in the polymer backbone with no wax and no antiozonants so as expected all samples failed ozone resistance. However, we were looking for differences in ozone failure. 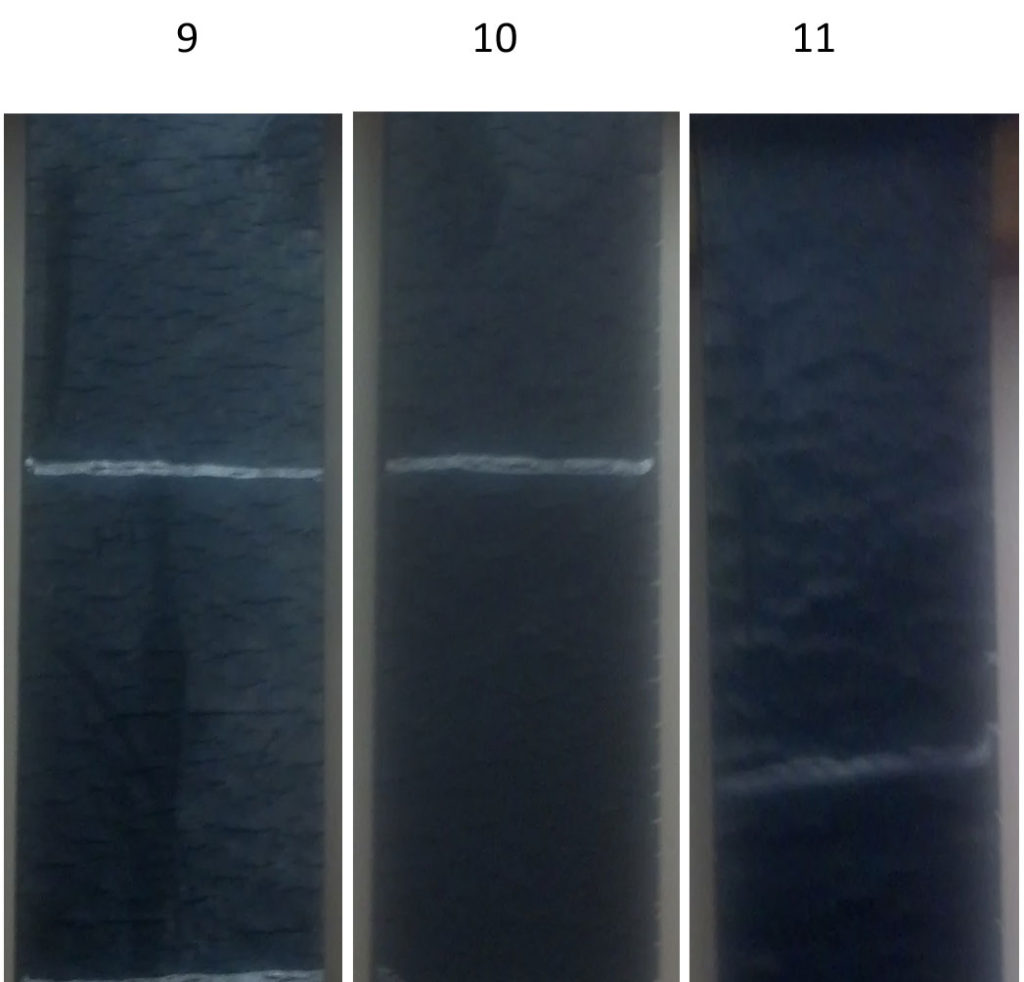 All of the accelerated VVO compounds performed better in ozone testing then the Control-1 and Control-2 compounds which experienced complete shear.

It is known that using VVO’s in a NR compound with lower % free sulfur and acetone extract will provide superior heat aging properties.2 Factice or VVO is made from fatty oils (soybean oil) that are mixtures of triglycerides of mono and polyunsaturated fatty acids. It is this unsaturation that allows for crosslinking.3 It has been found that in oil and sulfur mixtures that the sulfur combines at a ratio of greater than one but less than two atoms of sulfur per double bond when vulcanized. When the oil sulfur mixture is activated or accelerated the ratio increases to two sulfur atoms for each double bond lost.4 Accelerating the mixture ensures that more sulfur will be used up faster in the early part of vulcanization as diatomic sulfur leaving less free sulfur in the compound.

Polymerics custom rubber mixing services both black and color in most polymer types.